skip to main | skip to sidebar

Another word on Chinese made marking gauges

I've been aware of a high quality marking gauge from Lie Nielsen for quite a while and if my real parents ever discover that I was kidnapped as a child from the palace nursery, I will use my inheritance to buy it any everything else in the L-N catalogue. The Tite-Mark is of a distinctive enough design that it jumps out of every photograph of all the droolworthy toolchests that I've come across online.
I was intrigued to find its lookalike from this supplier. The seller offered replacement cutters, which made the tool seem usable if not first rate.
The first indication that something was amiss was the brand name in the printed catalogue, Marking Gauges.

The shipment arrived and I noticed that the name was the same on the packaging. It certainly looked promising but in very short order, a series of discoveries made it evident that this is simply an unusually badly fabricated shanzhai model.

One point that confused me was that there did not seem to be any fine adjustment threading. The two thumbscrews appeared to be tapped into the same solid piece of brass.
I secondly noticed how deeply the cutter was recessed into the headstock. Wow, that's certainly protective.

I began to pull the tool apart and the first really odd aspect was the channel that had been chiseled into nearly the full length of the beam. (The photograph on the website seems to intentionally obscure this feature and the image in the print catalogue is too small.) It required me to either remove the cutter or both thumbscrews to disassemble the piece.

The thumbscrews showed their primary weakness immediately. Although nicely knurled, that little point makes hardly any contact with the round surface of a beam, necessitating the channel along its length to create a flat for it to press against.

The modification to the beam started to make a little sense but then unexpectedly, I discovered that the headstock was not solid but a two piece affair connected by threads similar other marking gauges with fine adjustments.


But wait, how is this supposed to work together with the pointed thumbscrews compensated by the channel to allow the two parts of the headstock to rotate independently? It's a real headscratcher and another example of how great a gap there often is between Chinese (Taiwanese?) factory workers and their knowledge of what they are making even when they are attempting to reproduce the best that the market offers. But hey, that same factory did eventually find at least one buyer. 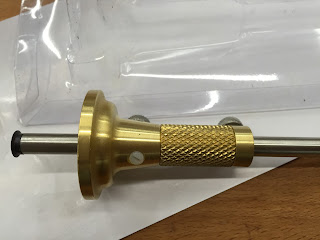 And to add another bizarre detail to this Frankenstein, there is also an unexplained threaded hole on the headstock similar in size to the ones for the thumbscrews. My best guess is that it was a mistake in manufacturing and simply plugged with plastic setscrew, but when you're on a roll, why stop with just one mistake?
Posted by Potomacker at 01:16

Get to know me!

where is that one item?